Dead animals in your home? Our experienced professionals at Norcal Wildlife Removal will safely and hygienically remove animal remains in your home or business.

Norcal Wildlife Removal specializes in handling unwanted animal guests in any form, we remove both live and dead animals, and handle a variety of species from birds to reptiles and mammals. We are available to residents and businesses across towns and cities in Santa Clara County, San Francisco County, and San Mateo County.

The foul stench of decomposing flesh is usually the first sign that there may be a dead animal somewhere around your property, and this is because animals rarely die in plain sight. They prefer to crawl up into a place with some form of shelter. The rotting remains of any animal are unpleasant and unhygienic for anyone to handle, except if you have the proper training on how to handle it. 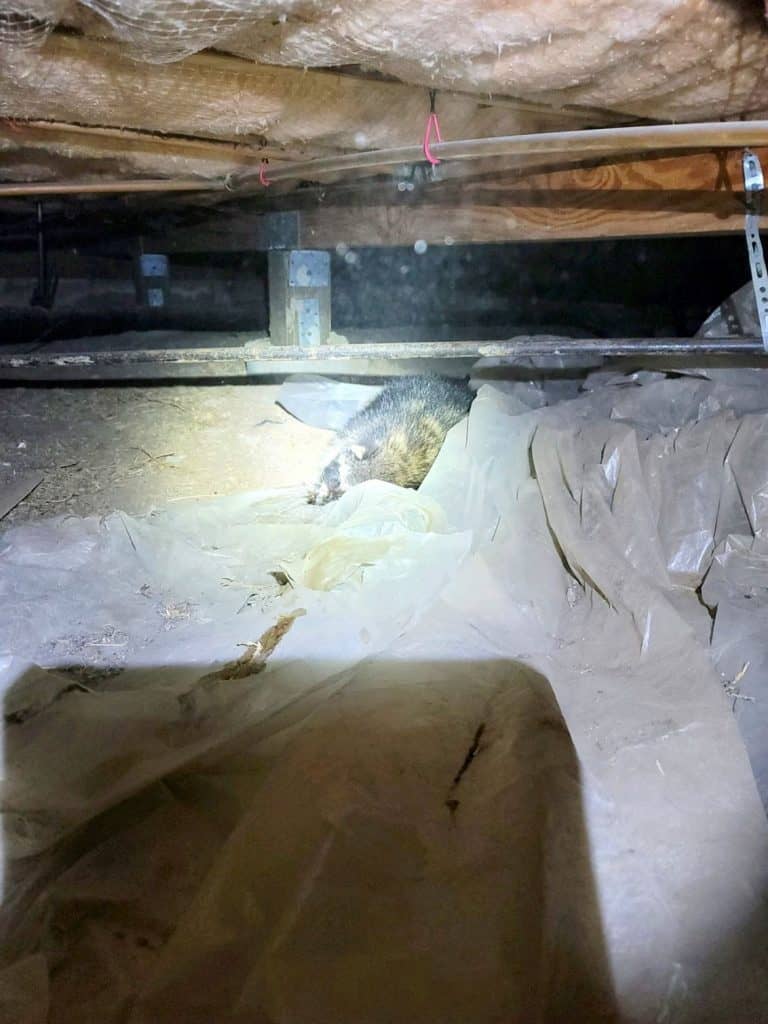 The remains of wild animals are usually a site crawling with tons of disgusting maggots and unfriendly microorganisms that can infect humans and cause a number of deadly infections and diseases. Plus, it attracts lots of insects including cockroaches, moths, flies, mites, wasps, etc. Even while alive, many animals act as hosts to pathogenic microorganisms that cause deadly diseases to humans and pets, and when they die their carcass is still able to spread deadly diseases, especially when handled unprofessionally.

To remove dead animals from your property we first have to find them, this is easy if the animal died in plain sight. But if your only evidence of a dead animal is an unpleasant smell, then our first assignment will be to find the carcass.

You will be surprised at where animal carcasses can be found, animals can die inside walls, beneath the insulation, in the ductwork, under the bathtub, and some other crazy places. And when trying to locate the carcass, our most valuable tool is our sense of smell. Yes, we use our noses to find the animal.

Disposing of rotting carcasses and cleaning up the contaminated site can be a tricky business and without the proper precautions you can get yourself infected with some deadly virus or fungus, and even worse spread the infection to those around you.

Removing dead animals requires some form of safety measure such as wearing protective clothing, cleaning up and sanitizing the affected area with a powerful disinfectant, deodorizing the environment to restore some form of normalcy, and generally making it safe again for humans and pets.

If there is a foul smell in your home, and you suspect it’s a dead animal, give us a call and we will come quickly to get it out. 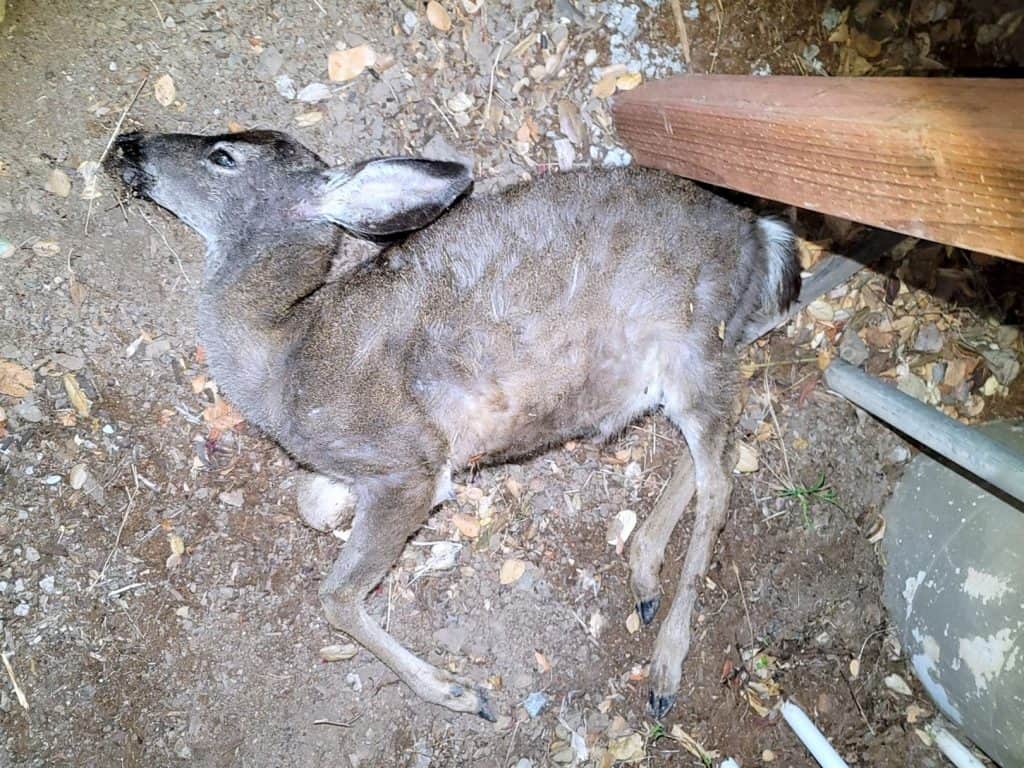 What happens if you have a dead animal in your house?

When an animal dies in your house, the very first sign will most probably be the unpleasant but unique smell of decomposing flesh. Except of course you stumble on the body before it starts to decompose. When an animal dies, the body is immediately attacked by different microorganisms which trigger decomposition. That unmistakable stench of death is caused by a cocktail of volatile organic compounds produced by the activity of microorganisms on the carcass.

Once the body of an animal has started to decompose, it’s highly recommended that you do not approach it for any reason because the site will be highly contaminated with pathogenic microorganisms.

Dead animals also attract scavengers which act as hosts to a number of pathogens. Whether an animal dies in your ceiling, attic, under the deck, in the walls, or in your basement, it’s important that you call animal control experts to professionally handle the removal to avoid the spread of diseases around your home and property.

How Long Does a Dead Animal Smell Last?

The smell of death starts at the onset of decomposition and will last for as long as it takes the carcass to completely decompose. This means that there isn’t any specified amount of time it takes for the smell to go away. If it’s a baby rodent that died, the decomposition will last for just about a day or two and so will the smell because the animal is very small.

An animal as big as a squirrel may take up to one week to completely decompose and the smell will also last for about a week. But if you’re dealing with something significant like a raccoon or a skunk, which are bigger animals, then expect the smell to be stronger and last for much longer.

An animal as big as a raccoon or skunk will take several weeks to completely decompose. In this case, the stench will be unbearable, especially if the animal died within or very close to your house.

Nobody should have to endure the awful smell of decaying flesh for whatever reason, once you get the first whiff of dead animal smell in your home, ensure you quickly reach out to Norcal Wildlife Removal for emergency dead animal removal, clean up, and sanitization.

How Can You Get Rid of the Smell of a Dead Animal?

You can only completely eliminate the awful smell of decomposing dead animals if you find and remove the carcass. The smell will never go away provided the dead body of the animal is still there. To get rid of a dead animal or animals, invite wildlife control experts to carefully remove the remains and clean up the affected area.

When we remove dead animals from a place, we completely clean up and disinfect the site with a powerful disinfectant. This is to ensure that no disease-causing bacterium escapes because they have the potential to infect humans and pets and can cause very serious health problems. Our technicians will also treat the odor using an odor neutralizer which contains enzymes that break down the chemical compounds responsible for the bad smell.

Cities we serve include: 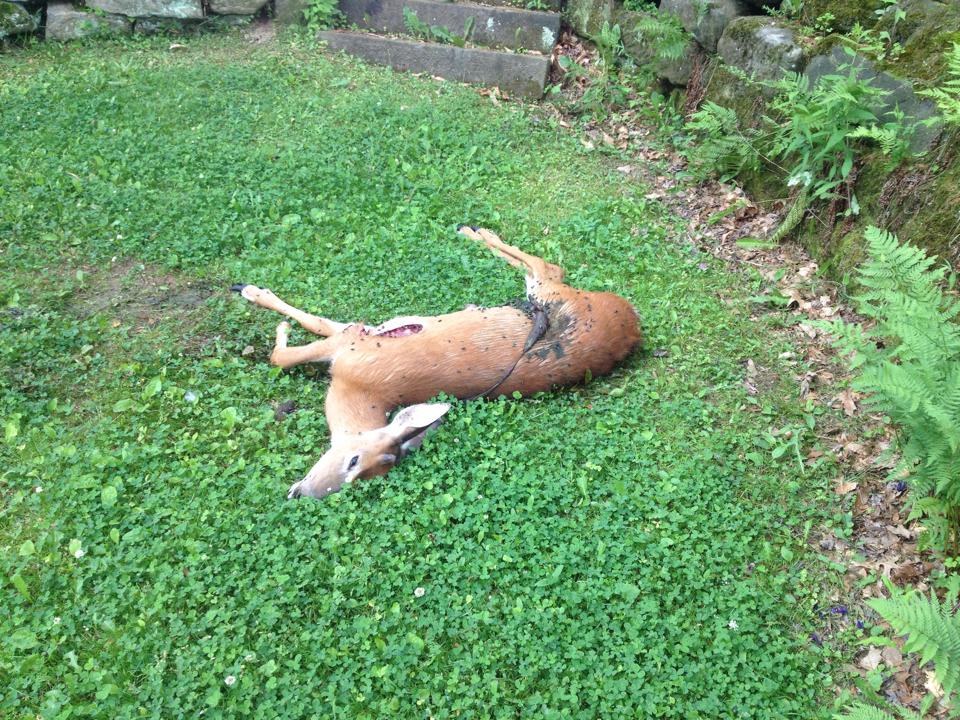 How To Remove a Dead Animal Under The House

It’s not at all uncommon to discover there’s a wild animal on your property. For homeowners all over the United States, snakes, raccoons, squirrels and everything in between are a common enough occurrence, which is why most want to know what to do if they find one. To learn more about dead animal removal visit aaanimalcontrol.com.

Well, if you learn there’s a wild animal on your property, it stands to reason that you should contact a wildlife removal professional like Norcal Wildlife Removal. But what do you do if the animal is already dead, and worse, trapped under your house?

Well, let us show you.

Remember that you want to act quickly – as soon as you discover the animal’s presence under your home. The more you leave a dead animal on your property, the higher the chances are for attracting other unwanted wildlife.

When you’re preparing yourself to dispose of a dead animal, make sure you equip yourself with adequate protective gear. You’ll want to make sure you’re wearing protective rubber gloves, to avoid coming into direct contact with the carcass (which can, in turn, expose you to a wide range of serious diseases).

You’ll also want to wear a protective mask, so as to avoid inhaling any bacteria-filled particles from the rotting carcass. Make sure you also have plastic bags, disposable containers, and other such products nearby.

Next comes the nasty part. This is where you’ll actually have to get down on your hands and knees and into the crawl space underneath the house. Take a flashlight with you and advance slowly, in case there are other, live animals trapped underneath.

It can be difficult to spot a dead animal under the house, so a good trick is to stay still and listen for flies. Flies can be a good indicator to lead you to the dead animal, so try to pay attention to them.

Ideally, use a sealed bag to dispose of the dead body as swiftly as possible, and avoid prolonged contact with the carcass, for fear of germs. Make sure your pet isn’t around, to prevent them from coming into contact with the dead animal and potentially contracting a disease.

Just because you’ve removed the dead body itself from the property doesn’t mean your job is done here. You still need to spend some time in the crawl space. Use a strong disinfectant and cleaning product to scrub the area where you found the carcass and nearby, so as to remove diseased particles. It’s important to thoroughly clean the crawl space, to protect yourself, your family, and your pets from disease.

When disinfecting an area where you found a wild animal, bleach is never a bad idea.

It’s not some random coincidence or misfortune that the dead animal was on your property. It probably came in through a hole or crack, either through your vents, foundation, fence, or something similar. What’s more, the animal was attracted to your property for a particular reason (most commonly, these include a safe place to nest or a readily available source of food or water).

Now that you’re safely removed the dead animal from your property, you need to figure out why it was there in the first place. Identify the hole/crack the animal came through and seal it with difficulty to chew or claw through materials. Remove any sources of food or water that may be attracting wild animals and fix the hole that may have served as an entry point.

Norcal specializes in rat/mice/rodent control, dead animals & snake removal. Also well versed in removing squirrels, raccoons, opossum and skunks. We are capable of sealing most entry points and experienced in restoring your attic or crawlspace.